Home World News Phase 3 starts for everyone except Sardinia: so the government has listened...

7pm – subscribe to the newsletter e
get the latest updates in your inbox.

From 00.01 today drop travel restrictions between one region and another. We have confirmed and repeated it in all ways, through all the government media, from Boccia to Speranza. But no, it’s not quite like that! There would be a small clause on purpose, written in lowercase, in Cyrillic, with a sinister Baroque and a farcical Leopardism. We had joked: in all regions, except in Sardinia.

In fact, nobody notices, almost not even the Sardinian newspapers (only theSardinian Union makes mention of it this morning, at least until 7 am), also because the “clause” is affixed in the evening, aumma aumma, by the “Minister of Infrastructure and Transport in consultation with the Minister of Health” (Ministerial Decree 2.6.2020 n. 227) and only the most discerning notice it.

I immediately translate, in an understandable Italian, the clearly unconstitutional pearl as well as legally and logically aberrant (I would dare to write ‘affected by wickedness and cialtroneria’ if only they were administrative defects), without having to use the simultaneous translator: the Sardinia region will open to all only from 13 June, not before. These days it will only be allowed to those who are resident in Sardinia.

Poffarbacco! And what would have determined such a provision worthy of the best contemporary political and juridical minds? We read that this would happen “in order to avoid the spread of the epidemiological emergency from COVID-19 in the Sardinia Region, also in relation to the particular situation of the health organization of the same Region “(art. 2, co. 1). 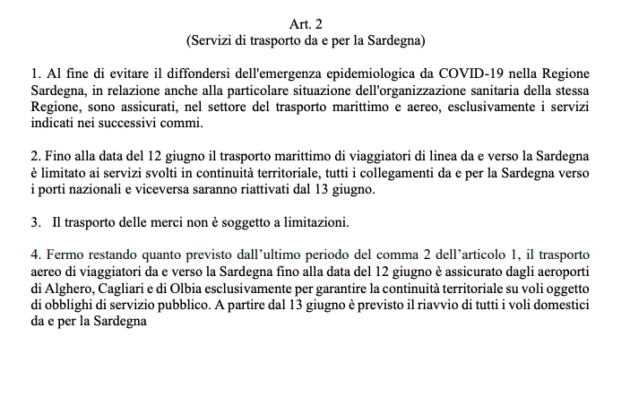 As you can read it is therefore one false motivation, since not only does there not be any spread “of the epidemiological emergency from Covid-19 in the Sardinia Region” but above all it does not even stand to put it “in relation also to the particular situation of the health organization of the same Region” given that this could also be extended to other southern regions.

Recites art. 16 of the Constitution, evidently unknown to the signatory ministers, that “every citizen can move and reside freely in any part of the national territory, except for the limitations that the law establishes in general for reasons of health you hate safety. No restrictions can be determined for political reasons. ” Therefore, not only can this limitation not be imposed by a regulatory source (the Ministerial Decree) but also for “political reasons” which clearly support it.

It is indeed evident that, as I wrote days ago – “What can make a governor profess for about two weeks that nobody will enter ‘his’ (uti dominus) Region (especially Sardinia) without the ‘health passport’, then also settling for only the ‘certificate of negativity’, regardless of the Constitution (in this case art. 120 of the Constitution) and the only certainties of the scientific community (ie that there is no passport or certificate suitable to certify that one is immune to himself and above all to others from Covid-19)? ” – that the governor’s unscientific and illogical claim Christian Solinas to armor the island, carried on with obstinacy for weeks (although everyone among scientists and politicians explained to him that it could not be done) ultimately led to a sort of Stockholm syndromeor “Solinas syndrome” by taking government action hostage. Whose hostage gave birth to Ministerial Decree 2.6.2020 n. 227 launched on a par with carbonari. 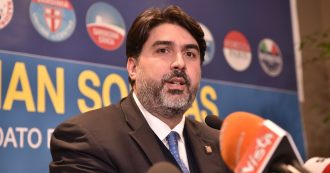 Bobby Bonilla day, that is, don’t make a club and get paid – The Media Blog

Ghislaine Maxwell, accomplice of Jeffrey Epstein, has been arrested