They violated the curfew imposed by the authorities and took to the streets, but the eighth night of protests in the United States for the death of George Floyd, suffocated by 4 policemen from Minneapolis, has not left the trail of the vandalism and gods looting Monday evening. Also complicit are the appeals to non-violence by important exponents of the African American community, from Michael Jordan to the reverend Jesse Jackson, up to the family of the same Floyd, the demonstrations were held by New York to Los Angeles without the riots of the past few days. Over two hundred arrests a New York bring the total to over 5,600 people who ended up in handcuffs for theft, blocking of highways and violation of the curfew. Killed a St. Louis, in Missouri, David DornA 77-year-old African American retired local police chief found dead on the sidewalk in front of a pawn shop that had been ransacked on Monday night. “Maximum respect on our part for the family of David Dorn, brutally hit and killed by despicable looters last night – he wrote Trump in a tweet -. We honor ours agents police, perhaps more than ever. Thanks!”.

Protests in the US, journalist in Trudeau: “Trump evokes military action, what do you think of it?”. The Canadian prime minister remains silent for 21 seconds

But to his threat to use the army to quell the protestsreplied the head of the Pentagon Mark Esper, who said he was against the use ofInsurection Act – which allows you to use the army against riots internal. In addition, overwhelmed by controversy, Esper has distanced himself from the tenant of White House stating that he did not know that he would be part of a ‘photo opportunity’ with president who was holding a Bible in front of the St. John Church. Esper argued that his goal is to keep the defense department “apolitical”, “outside of politics”. Trump meanwhile, he continues to tweet against his rival dem Joe Biden. “In three and a half years I have done much more for the community African American than I have done he in 43 years, “he wrote, accusing him of damaging African Americans with the Crime Bill, the 1994 law on combating violent crime and law enforcement, when Biden was a senator. “Instead I did more for African Americans than any other president, except for the great one Abraham Lincoln“. 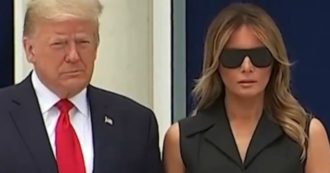 Donald Trump to his wife Melania: “Smile”. And the first lady reacts so in front of photographers

Houston police chief at Trump: “If you have nothing to say, shut up” – Responding to the president who had asked the governors to “dominate” the demonstrators, Art Acevedo, chief of police of Houston, said: “If you have nothing to say, how Forrest Gump, then don’t say it. I speak on behalf of the police chiefs of this country – said the policeman interviewed by the CNN – Please if you don’t have something constructive to say keep your mouth shut because you are putting men and women in their twenties at risk “. Acevedo, who expressing solidarity with the family of Floyd, who will be buried at Houston, asked to escort escort George’s coffin on his ‘homecoming’, stressed that “this is the basis of the leadership and we need leadership Now more than ever. It is time to act as president and not as in The Apprentice (the reality show where participants had to demonstrate that they have managerial skills to work with Trump, editor’s note). It is not Hollywood it’s real life and real lives are at risk. ” Addressing the protesters, the Houston police chief invited them to “march peacefully” and make themselves heard in theballot box“Because” many of those who protest they never voted but I tell you that you have a choice“. 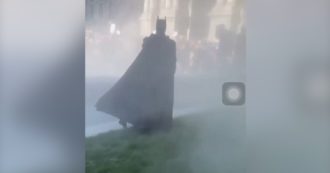 Batman emerges from the flames and tear gas of the Philadelphia guerrilla: crowd in raptures, incredible images

And the coronavirus epidemic continues – The social crisis that has overwhelmed the USA, bringing to light a complex galaxy of groups of infiltrators among peaceful protesters, obscures the health crisis that the country is still going through: just yesterday 20,461 cases have been registered coronavirus and 1,015 deaths from the disease, for a total of 1,831,821 positives and 106,181 victims. And the virologist from the White House Anthony Fauci, always cautious on reopening, fears that the violent protests of these days may rekindle the pandemic. The Democratic governor of North Carolina also interfered with the president’s plans Roy Cooper, who denied to Trump the possibility of using the Spectrum Arena of Charlotte for the Republican convention. “The governor Cooper it is still in the ‘state and home’ phase and does not allow us to occupy the arena as originally anticipated and promised, “said Trump,” we would have shown the beautiful North Carolina to the world, bringing hundreds of millions of dollars and jobs to the state. Because of you, Governor, we are now forced to look for another state to host the Republican national convention. ” What if Obama will speak tonight in streaming (at midnight Italian) of the crisis in USAon the front of the former Republican presidents George W. Bush breaks the silence and, without mentioning names, accuses “those who try to silence the voices of the wounded” for not understanding “the true meaning of America”. Justice will only come with means peaceable, he stressed, “but we know peace in ours community it requires justice without inequality ”.

In these pandemic weeks we journalists, if we do our job with conscience,
we do a public service. This is also why we are proud every day here at ilfattoquotidiano.it
to offer hundreds of new content for free to all citizens: news, exclusive insights,
expert interviews, surveys, videos and much more. All this work, however, has a great economic cost.
Advertising, in a time when the economy is stagnant, offers limited revenues.
Not in line with the access boom. This is why I ask those who read these lines to support us.
To give us a minimum contribution, equal to the price of a cappuccino per week,
fundamental for our work.
Become a supporting user by clicking here.

THANK YOU FOR READING ALREADY XX ITEMS THIS MONTH.

But now we are the ones who need you.
Because our work has a cost.
We are proud to be able to offer hundreds of new content every day for free to all citizens.
But advertising, in a time when the economy is stagnant, offers limited revenues.
Not in line with the boom in access to ilfattoquotidiano.it.
This is why I ask you to support us, with a minimum contribution, equal to the price of a cappuccino per week.
A small but fundamental sum for our work. Help us out!
Become a supporting user!

Protests in the US, journalist in Trudeau: “Trump evokes military action, what do you think of it?”. The Canadian prime minister remains silent for 21 seconds

George Floyd, the MP Ocasio-Cortez: “Hypocrite who wants the unrest to end without things changing. We need justice for everyone “

ABOUT US
Discover the latest news worldwide.
Contact us: [email protected]
FOLLOW US
Read about Titan Gel Comanda Black Latte site ul oficial
We use cookies to ensure that we give you the best experience on our website. If you continue to use this site we will assume that you are happy with it.Ok