In addition to being the date of ‘free movement’ between regions, June 3 also marks the resumption of travel between the countries of the Schengen area without quarantine or self-certification. At least in theory. In practice, different measures and rules will be adopted in each member country, always based on the trend of the epidemic. Borders are in fact a matter for individual states the European Commission can only invite everyone to evaluate coordinated agreements and to ensure that there is a common strategy for not disadvantaging some states over others. The principle that must apply is that of “non-discrimination“: It means that if a state opens its borders to a region, it must do the same with the same epidemiological situation. The Belgium, for example, today announced that starting June 15, it will reopen its borders to Schengen countries. L’Austria, which, while setting the same date, reserves the right to decide “based on the progress of the infections”. There Great Britain instead it confirmed the introduction of mandatory quarantine for anyone arriving after June 8. 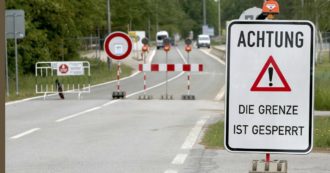 Coronavirus, Austria has reopened to Italy since mid-June “if the infections allow it.” The EU: “The principle of non-discrimination applies”

Belgium – Starting June 15, Belgium will reopen its borders to Schengen countries. This was announced by Prime Minister Sophie Wilmes at the end of the meeting of the National Security Council which also detailed the beginning, starting from 8 June, of the exit from the lockdown caused by the Covid-19 pandemic.

Great Britain – The British government confirms the introduction of a mandatory quarantine of 14 days for anyone arriving in England by any means, with or without coronavirus symptoms. The measure will take effect fromJune 8: today was presented to the House of Commons, against the reservations of the oppositions and some deputies of the same majority, from Priti Patel, Minister of the Interior of the Tory government of Boris Johnson, who specified that there will be no exempted countries and that the hypothesis of “air corridors” can only be assessed from 28 June. According to the minister, now that the rate of infection within the Kingdom has dropped “At record low” since March, quarantine is useful to avoid the risk that the spread of the virus “will be reintroduced from abroad”.

Germany – German Foreign Minister Heiko Maas announced the decision to eliminate from June 15 “The alert” for travel to European countries. The so-called “do not recommend” will be replaced by notices on individual countries based on specific epidemiological conditions: “We don’t have to be superficial, the pandemic is by no means over“He told the press.

Austria – Yesterday Vienna announced that the border with Italy will be reopened from 15 June “If the conditions of the epidemic allow it.” But in the event that the epidemiological curve worsens, we will evaluate the resumption of travel with the Italian regions that can demonstrate positive data.

Coronavirus, with the pandemic plan, the ECB bought 37.4 billion BTP in two months: 20% of the total purchases of government bonds

ABOUT US
Discover the latest news worldwide.
Contact us: contact@themediablog.co.uk
FOLLOW US
We use cookies to ensure that we give you the best experience on our website. If you continue to use this site we will assume that you are happy with it.Ok